“Here’s some words. Set them to music”.

A very simple instruction that has been issued to many a composition student over the years. I remember this being said, and the mixed response from my peers. Some had a song writing background and instinctively leapt in that direction, others took a more analytical approach and began looking at strong and weak beats, stresses and accents – annotating the text with a variety of symbols.

The art of writing an art song, however, is to remember that it isn’t just about setting a text. It’s about crafting a story. It’s forging the right mood and atmosphere, somewhat akin to the work of the impressionists, while still allowing the text room to be expressive in its own right. The role of the piano (and any additional instruments) is just as key as that of the vocalist, and that must be reflected in the music.

Speaking of the impressionists, we also have the whole world of techniques that previous composers have explored open to us. When we learnt about musical history in school, the vast majority of it is categorised. Renaissance, baroque, classical, romantic, modern/contemporary. You then get those in each period of music who are pushing the boundaries- increasing dynamic ranges, augmenting musical languages and exploring techniques dismissed previously. We’re now at a point where so much exploration has happened that there are now a wealth of techniques available to us to experiment with in our music – yet another element to consider when evaluating the atmosphere of an art song (or of any piece!).

Different composers have different working processes. When Graham sends over a new Cracked Voices text, my first response (after reading it through a few times, naturally!) is to write or type it – normally both. I then start jotting ideas around it linking to specific moments in the text, whilst also creating a huge thought diagram around everything to do with the text – the story, the history, what’s said and what remains unsaid, imagery and atmosphere. Sometimes I’ll find that I know precisely what I’ll be writing (even to the point of hearing it in my head) after internalising the text, and the notes and diagrams serve as a method of consolidating and confirming everything in my head. Other times I’ll need to spend some time playing with these thoughts and expanding them until I hit upon the right thing. 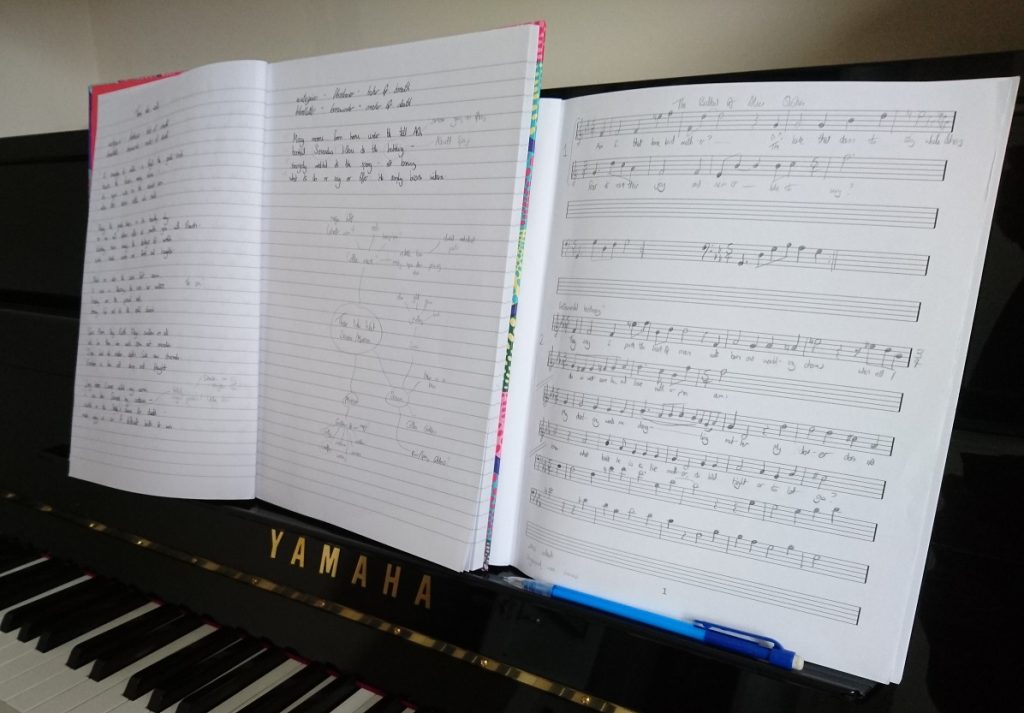 Text, ideas and sketches at the piano. Includes a sneak peak at some Cracked Voices sketches!

The piece I’m currently working on is the opening song of the cycle – Those Who Wait, about the goddess Senuna.  I wanted the atmosphere to be quite ambiguous tonally in the opening, while simultaneously relating to Senuna’s roots. When I realised that she was a Celtic goddness, the music snapped into place-  open fifth chords (chords that aren’t either major (happy) or minor (sad) in quality, just ambiguous) combined with both them and the melody moving in a fashion similar to traditional Celtic music formed the perfect basis to begin the piece.

The accused witches have a piece that currently reflects their characters and their story. A slightly jazzy ballad scored in an unusual five crochets in a bar, the piece reflects a slightly relaxed tango, hinting at the merry dance they trod. The melody line features a few rather unusual leaps, and time changes make the piece feel a little unsettled, as Alice and her mother head towards their fate.

Both these pieces are still being fleshed out, but their musical foundations are already firmly rooted. The scenes have been set – it’s time to sing.